Leading up to my first 24 hour solo event some I have been riding my bike big distances. Since the Brevet I have been confident in my ability to ride long and so was looking forward to the weekend (kind of). Lucky for em the weather gods played ball and the weather really couldn’t have been much better.

This was my 2nd weekend of hyper training. The first involved 10 hours and then 5 hours the next day, and this one was 12 hours plus 6 hours. After much contemplation of route, i.e. should I fly to Auckland and see how far home I can get in two days etc, I decided riding most of the way “around the block” would be a good option. Tim offered to leave the car in Featherston for me and so eliminating finishing the 12 hours with a climb over the Rimutakas.

So, at 4.45am on Saturday morning I left home heading for the Akatarawas. At home it was about 7 degrees with a light northwesterly and so I was quite comfortable in my short sleeved Helly Hansen top, arm warmers, cycle shirt and wind proof vest. This didn’t last for long, the temperature plummerted at Silverstream and the during the descent into Waikanae it was 3 degrees.

I always enjoy riding the Aka’s, it didn’t really get light until Staglands and so progress felt good. By the time I reached Waikanae I was pleased to feel the change in temperature because I was super cold. My plan was to stop in Waikanae for a coffee but I ended up going through to Levin as the traffic was light and the wind favourable. It was a nice feeling to have ridden for 4 hours and be barely feeling it. At BP Levin I bought some food and a coffee and rode through Levin drinking my coffee (until I dropped it and covered one foot in coffee!)

The section from Levin through to “top of” Palmerston North was just horrible. The road surface was rough, and there is very little road shoulder. The behaviour of motorists was bad too. Twice, a car overtook a truck just when I was passing in the other direction forcing me to ride on the grass!

I tested a Red Bull Shot at the bottom of Pahiatua Track and it made the climb over seem pretty good – the nice tail wind was also very helpful. I decided to go to Pahiatua for some lunch rather than take to more direct route to Masterton and started to get ahead of my planned timing. I picked up some lunch and another coffee and headed to Eketahuna. I was anticipating a tail wind and instead battled a very strong wind that wasn’t quite head. It was also a false flat. This was a low point for me but there is no point in grizzling when there you don’t have an audience.

I soon started to warm up (8.5 hours into the ride) and took my jacket and arm warmers off and then my ride became awesome. After Mt Bruce there was 30km of down hill with a tail wind into Masterton! My attitude changed and everything looked good again! It did help that it was warm and sunny. The further south I got the better the weather got too. 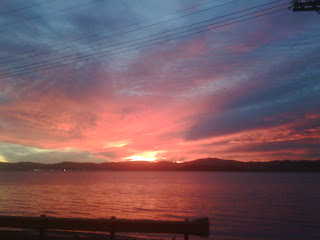 At Masterton I knew I would be about an hour early to Featherston so did some loops to make up the time arriving at the car at exactly 12 hours. The day ended with a spectacular sunset.

As my new bike arrived on Thursday I was super keen to ride it, so why not ride it for 6 hours on Sunday? So off to Wainui I headed. A couple of loops of the park and only 1.5 hours elapsed – I stopped for a grizzle where Tim and Shane were digging and ate the lunch Tim had carried for me. I then headed up to the fire road and along to the top of Blue Mountains Rd, following the Crazyman course. I really started to enjoy the new bike. It climbs really well and eats up bumps nicely. Considering how tired I was I think I rode really well and the route is pretty hilly! I managed 5 hours 45 all up.

So, some good miles banked, now for the important job of recovery!
Posted by Charlotte at 8:52 PM