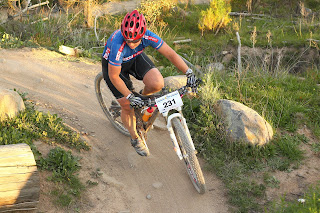 Waiting five weeks or so to write a race report is nothing but slack. I have discovered that it is easy to write when you are really happy with the result and very difficult when you are not.

Tim and I have decided that there will be another 24 Hour World Solo race sometime in the future - I have unfnished business. I really believed I had a chance at a podium finish in my age group and I am disappointed not to have achieved this.

My preparation was as good as I could have expected given the weather and the very major distraction of being made redundant! There are a couple of things I would change next time but nothing major. I would like to thank Lisa Morgan, my long suffering coach for preparing me so well for the event.

The race started well for me and I quickly settled into a relaxed pace. I can't say I care for le mans starts! I really enjoyed the course with the first ascent to the top being an easy gradient with a few rocks to keep you honest. Unfortunately there were not many places to eat or drink. The descent down the back through Western Wedgetail and Pork Barrell were rocky and reasonably steep. I am pleased to say I rode every section in the light and dark. I put my foot down once, I think, when a lady ended up down a bank in the dark, I thought it would be nice to pull her bike off her!

The 2nd climb to the top was mostly 4wd track, in my practise laps and during the first 8 hours or so this wasn't much fun – it felt very hot. After about 5am I enjoyed this climb as so many people were walking! It is great motivation to give a little more when other people have given up! 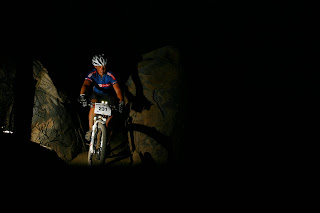 The descent back to the pits was fun, the first 3 corners of Rollercoaster got a bit sketchy after awhile and of course the corners on luge were always fun! I think the total descent time was 12 – 15 minutes.

The race fell apart for me early on, after about 9 hours. I just did not drink enough, it was quite hot and with the excitement of the race I just didn't drink. I came into the pits and said to Juliet and Tim that I was in trouble, at which point I was shaking like it was cold. It wasn't cold as both Tim and Juliet were still wearing t-shirts. At this point Juliet and Tim realised I was dehydrated and did their best to get me to drink. After an hour and a half I was back out there, after one lap I felt good however after the 2nd I was back in the state I had been a few hours before. This time it took me longer to get going. I stopped again about 1.30am and didn't get going until 4am. In total I had 5 hours off the bike – easily 2 laps and quite possibly 3 missed. I hate doing these numbers it makes it clear what might have been. 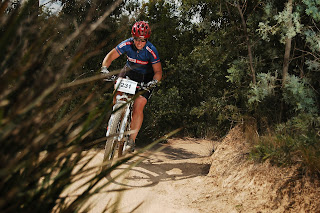 Once I got started again I started to feel much better. I was pleased to be still riding and was determinded to salvage something from what was a disaster for me. I kept riding strongly, and made sure I finished my bottle every lap, I also “paused” at the top at each pass to eat a gel. This strategy worked well and I got 5 laps in between 4am and just after midday.

I am disappointed with how I went, I am pleased that I got out there and kept riding at the end. How easy would it have been to pack up and go home?

A special thanks to the following, R&R Sport, Juliet for being my Pit Crew Manager, Tim for giving up his birthday to support me, my Mum, my Dad, Marc from R&R in Dunedin for tuning the Tallboy during the night, all the other people cheering and yelling and all the people back in NZ watching the event on the net – next time I'll deliver....
Posted by Charlotte at 1:01 PM