Kiwi Brevet Day One and Two

In 2010 I had such a good time at the Kiwi Brevet that I wasn't sure that I could repeat the positive experience, how could it get any better? After Le Petit Brevet I casually mentioned to Tim that it might be fun if we rode together and he agreed, and so it was a team approach for 2012.

The end of 2011 and the beginning of 2012 were extremely busy for us and it wasn't until after our wedding in mid January that we applied for leave and the Kiwi Brevet was all go!

Our physical preparation was limited, Tim was commuting daily by bike and I was riding where I could but with a huge amount of travelling required for work this was a challenge. On day one Tim mentioned after an hour and 40 minutes that this was now his longest ride of the year, mine came at 2 hours 40. We were confident that if we rode conservatively we'd fine, after all the brevet isn't a race...........

The day dawned overcast and grey, however this didn't last long and by 10.30am there was bright sunshine and a clear blue sky.

As this wasn't a race I was happy to sit back at the neutralised start and sift along just keeping Tim in my view up ahead. It was great to chat to people along the way and I was surprised how many people knew who I was and had read my 2010 account of this event.

Once we crossed the styles it was all on and people just went for it. Tim and I cruised together. The initial plan was to camp at Molesworth, however we decided if we reached Molesworth in enough time we'd make for Hanmer Springs (more to come about this...)

As we progressed up the Awatere Valley the temperature got hotter and hotter and I regretted my choice of clothing. I did test my Icebreaker cycle top around Wellington and found it really comfortable on hot days but this was hotter and I was too hot. I was uncomfortable and sweating madly.

The scenery was varied, starting with vineyards and moving to farmland with a gradual incline and a few hills. We remarked that we were making good time, and maybe should be heading for Hanmer. At this stage I was already hot and upping the pace was a mistake.

We stopped for lunch (fresh bread and cheese) in the midday sun. After this the day went down hill for me and the route went up and up. The heat was bothering me and the hills seemed emense and I started with cramp in my left leg, then my right leg and then my left again. I was sure I was drinking enough. Eventually I sent Tim off ahead to set up camp at Molesworth, I knew he was getting impaitent waiting for me. Even though I felt I was crawling along there were people worse off than me and I passed several in my crippled state. I can tell you that the sign that says “Molesworth 10km” is wrong unless of course 14.85km is 10km?

I arrived at Molesworth at 4.38 about 30 minutes behind Tim. As I arrived a group of about 11 riders headed into the station proper. We decided that we would never get through by 7pm and decided to sit tight and leave in the morning.

We were the first to camp at Molesworth and gradually over the next 3 hours the campsite filled up with 30 or so brevet riders. We camped with Josh and Michelle, Julie and Thomas and Craig with his weird and wonderful set up. It was a fun night with good company, a river to swim in, toilets, warm temperatures, coffee and a pasta meal. We were inbed by 8pm and had a great rest.

The Ranger was kind enough to open the gate at 6am and so Tim and I struggled out of our cozy tent at 5am. Having a cooker meant I was able to have a quick coffee before we headed off. Time tends to get away from Tim and I so we weren't actually on the move until 6.15am, things often happen slowly in our world especially in the mornings.

The climb over Ward Pass was rewarding and not as long as I expected New Zealand's highest road pass to be. We stopped at the top with Josh and Michelle to look at the view and watch some others come up the hill behind us. Before long we were filling our bottles from the ford on Isolated Flat. It was no where near as corrigated as two years ago and its downhill incline was most welcome. Tim and I rode well, and Tim was pleased that everytime he checked where I was I was right there on his wheel. We made good time and were approaching Acheron before long. The scenary really is spectacular and I couldn't help wondering about winter time and amounts of snow the area could get.

We met a ridiculous number of 4WDs as we entered Acheron, approximately 20. We were pleased not to meet them on the road as they were pretty aggressive drivers. I couldn't see the point of driving in a dust convoy, all they were going to see was dust! I heard later on someone had a slow speed head-on with these guys.

As we approached Jollys pass we passed Jimmy who 10 minutes later passed us at a crazy rate of knots yahooing down the hill. I half expected to find him off the edge of the track.

At Hanmer Tim headed for the pub and I did the shopping for dinner, breakfast and lunch the next day. Bread, packet soup, pate, pringles and 2 minute noodles were on the menu. We were soon joined by Josh and Michelle. After wedges, 2 coffees and the first beer of the trip Tim and I headed 50km down the road past Culverden and to the Hurunui Pub where we tried to eat more and had another beer. We were conscious that the next place to buy food was at Sheffield 130km or so away. The Hurunui pub was great, the service friendly and the food fast. We sat outside and soon at company from Julie and Thomas, Pat and another guy whose name I don't recall (an English dude). 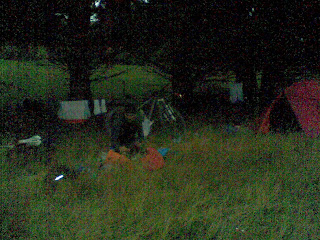 The next section was an unrewarding 30km of thick gravel leading into MacDonald Downs station. We had no navigation issues here however I believe others did. Once into the station the navigation was easy as a main trail flowed through the station. The trail was 23km long and we hardly saw any animals. I am still blown away with the size of the station, just massive. Near the end Tim and I stopped for a bread and pate break, most tasty and very timely. With food in our tummys our spirits lifted and we head for Okuku Pass Road. At this point Tor caught us and we all rode together until we met Jimmy who had decided to camp by the first river crossing. By this time it was 7pm and Tor decided to camp too. I wasn't ready to stop, why waste day light? We took the opportunity to replemish our water supplies, add some iodine and then headed over Okuku Pass and into Lees Valley. At around 8pm we decided that it was best to set up camp in the light and so we chose a spot on the side of the road and under a tree. We cooked our soup and noodles and enjoyed the scenery and retired about 9.30pm. As we were going to bed two riders cruised by.....they ended up camping just round the corner.


Around 11.30pm so random animal was sniffing and snuffling around our tent, a possum, or hedghog maybe? Neither of us could be bothered moving to find out!